As I prepare for another major home renovation (that comes with life in “this old house”) I make a list of items for the Habitat for Humanity pick-up later this week.

Some of the items obviously need to go — such as the well-worn loveseat that has moved from living room to family room to college apartment and back again ultimately dumped in the old kitchen and now favorite sleep spot for my granddog, Maggie, when she visits. (Sorry Maggie, hate to send off your favorite cozy bed at Nana’s, but it must go… Everyone finds it disgusting, except you…  I promise to find something that will be just as appealing. Hopefully you will be pleased.)

Then there is the 31-year old microwave that still works amazingly well despite the cold spots that were just part of the technology back in those days…  An old TV stand that serves no purpose in our attic… and the cherished (at least by my husband and I) baby crib and dresser, which we have carefully moved from attic to attic across three states and back again to its original community. I had envisioned this crib suite that our daughters used being all nice and special for grandchildren one day…

The granddaughters arrived. The bed and dresser at Nana and Pa’s house was cleaned and assembled complete with new linens. It was an exciting day when the first granddaughter was tucked in for her nap!

Now, my daughter humored her parents, but it quickly came out that she was concerned that her baby was not sleeping in a pediatric-approved safe and sterile crib! Despite the fact that it was safety approved for her and her little sister, times have changed.

To not cause any family disharmony I went out and bought a little mesh port-a-crib. Granddaughter number one slept in it until she graduated to a big bed. The old crib was always ready and available.

Then the second granddaughter arrived. My sweet daughter once again humored her parents, and this child spent all of two nights in the old crib before the port-a-crib was pulled out of hiding.

So I asked my younger daughter if she wanted me to save the old crib for her children, and in her matter-of-fact way she politely told me that she had no problem with her children using the port-a-crib as well. It was just fine with her if I found a new home for her old crib! I finally got the message…

Anyway, back to the Habitat for Humanity list…  I told the gentleman who was scheduling the pick-up about the crib and dresser. He was happy to take the dresser, but said he “could not take the crib” because it wasn’t up to current safety code and the organization did not want the liability of offering old cribs. He suggested I just put it out with the trash….  Which, frankly, broke my heart!…  How could a family keepsake filled with so many wonderful memories that remained functional and useful (even if it is rather ugly) have no value to someone!!! First my own children reject it, then the Habitat staff!

So sad that I have to put something that someone might appreciate out on the curb for trash pick-up so that it can take up more space in the landfill! Maybe if I put the crib out there the evening before, someone who needs a bed for their child can take it and use it. There are plenty of kids who sleep on the floor or worse. Seems this would be an improvement for them.  But I am just a sentimental grandmother who doesn’t like to throw away things that might be used to benefit another…

At least I had the joy of seeing both of my granddaughters snooze a bit in their mom’s crib. It was worth holding on to it all these years just for that experience! 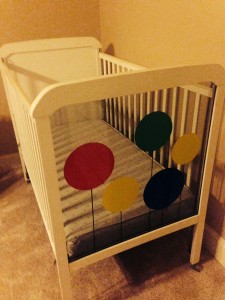