The teamwork of a long-term relationship is fascinating. Perhaps nowhere in life is the fact that we are creatures of habit more obvious than in our relationship patterns. We not only become locked into habitual ways of interacting with each other, we even grow accustomed to perceiving each other in certain ways. These perceptions resist changing even when overwhelming data suggest that a fresh perspective would lead to a more accurate understanding of the other person and the relationship.

These perceptions and behavioral patterns constitute the relationship “contract” that organizes who you will be for each other and how you will live together as a couple. Several universal truths about relationships are worth noting:

During the initial stage of romance, our thoughts, observations, fantasies, and conversations add clauses to a “contract” that organizes the relationship on both a behavioral and emotional level. Much of the “negotiation” of the initial relationship contract is done consciously. Many early days together are spent discussing likes, dislikes, past experiences, family dramas, emotional hurts and victories, dreams, future plans, and so forth. Such discussions shape images of what type of partner each of you wants and needs, given who you were and what your life experiences have been up to that point. If those discussions do not occur, it is not likely that the couple has a future in store.

In a state of infatuation, we all agree to be what our partner needs even if doing so means leaving some parts of ourselves out of the relationship. This can cause trouble for the relationship down the road… Ultimately each partner may grow resentful of losing parts of themselves that once mattered a great deal. (I always thought my husband would want to swim and dance as much as I did. He, in turn, assumed I could also spend hours each week during football season in front of the TV. Wrong!)

Stay tuned for more on what makes a marriage work… 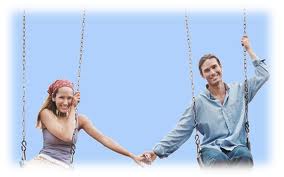 John M. Gottman, Ph. D. is a well-respected relationship expert in our country. He has written many books and articles and done extensive research on how relationships work, or don’t work.

Gottman’s goal has been to uncover the truth about marriage and answer the many questions that have puzzled us for a long while: such as

Why is marriage so tough at times?

And how can you prevent a marriage from going bad — or rescue one that already has?

Gottman’s book, The Seven Principles for Making Marriage Work (1999) is a culmination of much of his research, which he synthesized into Seven Principles, that he believes, will help prevent a marriage from dissolving. If we can work as individuals and couples in strengthening our skill and maturity in these area we have a better chance of improving our marriage, hopefully preventing breakdown, or at the very least learn important lessons so that we don’t make the same mistakes in future relationships.

Gottman believes that key to learning these skills and making them work requires emotional intelligence. “What can make a marriage work is surprisingly simple. Happily married couples aren’t smarter, richer, or more psychologically astute than others. But in their day-to-day lives, they have hit upon a dynamic that keeps their negative thoughts and feelings about each other (which all couples have) from overwhelming their positive ones.” This is what Gottman means when he uses the term — emotional intelligence.

Principle 1: Enhance your love maps (I defined “love maps” and how to construct one in an earlier post)

Principle 2:  Nurture your fondness and admiration

Principle 3: Turn toward each other instead of away

Principle 4:  Let your partner influence you

Above all else, become and remain “best friends.” Work at it. Rediscovering and reinvigorating the friendship bond goes a long way toward sustaining a marriage for the long haul.

There are often times in our life when we feel anxious and overwhelmed. This is normal, particularly when we have many responsibilities and obligations pulling on us. Controlled breathing can help to calm us during periods of anxiety and stress.

To make deep, controlled breathing effective, it helps to focus intently on the rhythmic pattern of your breath as it goes in and out. You’ll breathe easier — both literally and figuratively — once you get the knack of focused deep breathing. This skill is not only a marvelous stress reliever in itself, but also the first step in many other relaxation techniques.

Here are the basic steps:

1. Sit in a comfortable position.
2. Close your eyes. Place one hand on your belly, just below the navel.
3. Take a long, deep breath in. Try to make your hand rise slightly as you inhale.
4. Let the breat out slowly. Try to feel your hand fall slightly as you exhale.
5. Keep taking slow, deep, controlled, breaths for a few minutes. Focus on the steady rising and falling of your hand.

If you have trouble getting the hang of belly breathing, try lying down and placing a book (instead of your hand) on your belly. Then concentrate on making the book move up and down with your breathing. Many people find that the visual cue helps at first. Once you have mastered deep breathing, though, you will be able to do it anytime, anywhere, in any position.

This is one of my favorite exercises to do when I am struggling with something difficult and want to keep myself calm and focused on action that can make the situation better.

Tell us what breathing strategies best help you…