One of my weaknesses is collecting cats. At one point we had ten, nine of them strays who wandered to the door, nurtured by me or our daughters. They all became family.

It started as a small child when dad took me to the plant of the industrial furnace company where he worked to show me the workplace cat (on site to catch mice, I was told) who had a litter of kittens in the men’s restroom. Four adorable tiny kittens in a box with their mommy… It was love at first sight. I claimed the golden one as my pet when it was old enough to eat on its own. The wait for my first kitten seemed like an eternity to a four-year old.

Others tell me I smothered that poor little cat, trying to wrap it in blankets, cuddle it, rock it in my doll cradle, and push it in a carriage. I fought for the opportunity to have the kitten sleep in my bed at night, but lost that battle. As an adult I modified the rules regarding sharing space with pets.

One of my saddest memories is when the cat escaped out the back door one evening as an aunt who was babysitting my brother and I brought us inside after play. Sweet aunt frantically tried to capture the critter while I cried at the backdoor. Dad even looked later, and again the next day, with no luck. I had failed my first attempt at “mothering.” My cat was gone.

So, back in 1997, the very day we moved into our current home, one of the girls spied something white and furry darting among the bushes in the back yard. Investigating, she discovered a very scrawny and nearly starved kitten, obviously abandoned. It was appreciative of the food offered, and quickly responded to the affection and care of its new mommy. The rest is history…

Peanut has lived all these years with our family, mostly outdoors, but over the past several years inching his way into the house during storms, then rainy days, then cold nights, ultimately indoors with us, going out to play on lovely days. He had many fine qualities, and putting him to sleep after a sudden decline in health was not easy. I find myself thinking that if Peanut were a human being he would have been everything most of us would have wanted in a true friend…

What an honor and privilege to have shared life with this guy…  I like to think that I did a better job of caring for Peanut than I did my very first cat. Guess we learn a few things about life as the years pass. 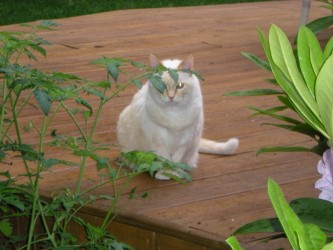